Together at the finishing line 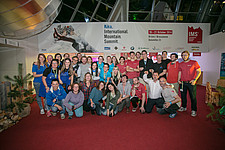 Once again, the Kiku. International Mountain Summit was very successful. Hence, a warm thank you to all of you. With 7800 visitors coming from all over the world, the interest in the Mountain Festival is still very high. More than 90 speakers presented, discussed and analyzed all the different facets of the mountain. There were talks about mountain medicines as well as about the mountain spirit; there was time for flights, excursions and parties. Renowned guests from all over the world like David Lama, Steph Davis, Mark Inglis, Alain Robert and many more showed how important and meaningful a yearly meeting like the IMS can be for mountain lovers. Without the precious support of our partners, sponsors and volunteers such a smoothly run Mountain Festival would not have been possible. For six days, we could share our emotions regarding the topic of mountains and we are already looking forward to next year's 2015 edition.

A very special thank you to all of you. The best snapshots of IMS 2014 are online on our website and on Facebook.

High-calibre congresses at the IMS 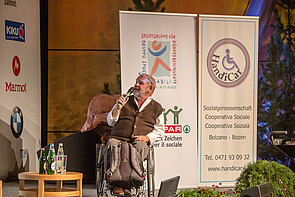 Three congresses stood out on Friday and Saturday of the IMS weekend. On Friday the question of whether the mountains should be accessible to everyone - - including disabled people - - was analyzed. At the Forum, thanks to the organizational efforts of the social cooperative HandiCar and the local sports group for disabled people in South Tyrol (SGKS), not only those directly affected could participate, but also scientists like Dr. Dr. Sascha Plangger took part. He discussed the problems that exist in communicating with disabled people: It is of great importance to support each person, however the media often distorts reality, he alleges. The New Zealander Mark Inglis proved in his speech that nothing is impossible. He was the first double amputee to climb Mount Everest and to win a silver medal in cycling at the Olympic Games.

As part of the Cycle Summit, the yearly meeting of the largest European cycling tour operators, the topic of travelling combined with bicycling was introduced at the conclusion of the IMS. Brand-new trends were the focus of the meeting.

The controversial topic of doping in mountain and mass sports is often purposely not spoken about. Therefore, bringing up the topic for discussion was long overdue. During the IMS congress, on Saturday October 18th,,, statistics were presented which proved that increasingly more mountaineers are taking medications than was previously thought in order to improve their performance. Renowned doctors like Urs Hefti, Peter Bärtsch, Marco Maggiorini and Martin Burtscher presented clinical test results. Jörg Jaksche and Francesca Canepa represented the point of view of the athletes.  In cooperation with the organizers AVS, EURAC and Luigi Festi, Head of the International Master in Mountain Medicine, other topics in addition to doping were also analyzed in depth.

Pure Willpower on the IMS stage 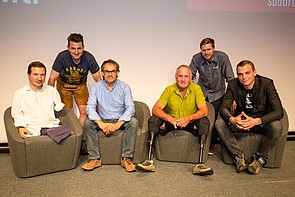 During the opening evening of the 6th edition of the IMS two impressive personalities were on stage: Andy Holzer, the blind climber from Austria, and Louis Corbett, the 13-year-old boy who comes from New Zealand and who is losing his eye-sight due to a degenerative eye-disease (Retinitis Pigmentosa).
Both are facing their fate with extraordinary willpower and, despite their fate, are trying to experience as much as possible of the mountain world. Together with Louis, six members of his family traveled with him from New Zealand. The urban climber Alain Robert also had to undertake a long journey. He comes from France, but is living at the moment in Indonesia. The French Spiderman is renowned for his extraordinary performances on building facades. He has climbed 140 buildings measuring up to 828m, been arrested 70 times, fallen down various times and even was 5 days in a coma. It is also remarkable that even though he has a disability of 66% and suffers from vertigo, he still aims to climb to the top of the tallest buildings. The protagonists of the evening “WillPOWER to will” have clear goals which they never lose sight of. The double amputee Mark Inglis, who comes from New Zealand, holds speeches worldwide regarding the topic of willpower and motivation in order to help people to motivate themselves. The Austrian psychologist, Georg Fraberger, born without limbs, talked on the IMS stage about how people should try to find their own motivation from within themselves.

Philipp Burger, frontman of the local German-speaking rockband, Frei.Wild, never gave up his dream to be a professional musician and has shown that motivation and willpower are decisive for reaching one's target.

The American Steph Davis, the only woman among the athletes on the IMS stage, is one of the few women worldwide who combines freeclimbing with BASE. Flying is her passion, but it is also what was responsible for the loss of her husband's life: Mario Richard died during a Base-Jump. Pure adrenaline and constant thrill-seeking is what the canyoneer Warren Verboom and the Big Wave Rider Sebastian Steudtner have in common. At the Mountain Xtreme, all three extreme athletes, together with a psychologist, a sports reporter and an organizer of extreme sporting events, took part in a discussion analyzing how much fear, willpower and courage does one need and what is the potential for an addiction to occur. The smallest details can make the difference between life and death and shouldn't be underestimated. That was the upshot of the evening.

Without any doubt, one of the highlights was the discussion „Cerro Torre- the story behind the story“about the project Cerro Torre, one of the most difficult and at the same time most beautiful peaks in the world. David Lama is the exceptional climbing competitor who has become one of the most respected mountaineers worldwide. In his film “Cerro Torre-a Snowball’s Chance in Hell” his exceptional mountain skills were on display. In a constructive confrontation with Reinhold Messner, the Cerro-Torre project was analyzed from various vantage points, addressing many aspects of mountaineering. 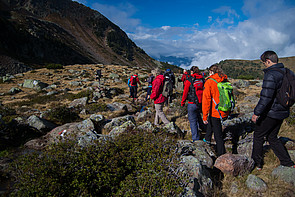 The Walk Day by GORE-TEX® on the Plose, Brixen/Bressanone's house mountain, was very warmly received. The early birds among you had the unique opportunity to hike with Hervé Barmasse and Peter Habeler and to enjoy a dialogue with them at the CAI mountain hut before the start of the two mountain meetings on the Rossalm.  Some of you also took the opportunity to get to know Alain Robert, Louis Corbett and Andy Holzer better. They also had taken part in one of the organized IMS Walks.

At the same time those enthused by flying had the chance to paraglide during the IMS Fly Days with professionals like Toni Bender or hang-glide with the world-champion Alex Ploner.

Meanwhile the participants of the Climbing Day by GORE-TEX® could get professional tips
from David Lama and the exceptional Scottish  climber Dave MacLeod.

Geocoachers had a unique opportunity to look for hidden caches on their own on the Plose. The IMS Geocaching event “Catch it if you can” opened on Saturday at the Fortress of Franzensfeste/Fortezza. Eventually the participants reached the Rossalm, where the Marmot Tent City had been established and the adventurers could share their experience in front of a camp fire. Many of the geocoachers let us know that the sunrise on Sunday in the high altitude was indescribable. 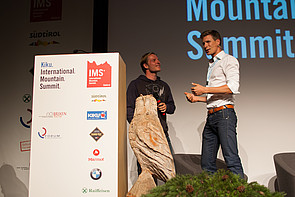 The Kiku International Mountain Summit is a complete work. Worldwide famous sponsors like GORE-TEX®, BMW, Marmot and Kiku have for years been part of the large IMS family together with smaller and also highly involved companies from Brixen/Bressanone and South Tyrol. Financial institutions like the Raiffeisenbank or the Foundation Südtiroler Sparkasse support the Mountain Festival. From the beginning, the local South Tyrolean government and the umbrella brand South Tyrol and the municipality of Brixen/Bressanone have believed in our ideas and have supported them financially. This year more than 70 partners, sponsors, co-organizers and friends of the IMS have helped to organize the content. Therefore, it was possible to bring young people closer to the topic MOUNTAIN. During the IMS Fly Days people could take off and could bring brand new articles to the Festival (Komperdell, Swisstrac, Marmot, GORE-TEX®,BMW, Nova) closer to mountain lovers, with or without disability. All sponsors, partners and supporters a warm thank you for their support. Happy, satisfied guests that are going back home with a rucksack full of emotions, experiences and meetings are also their merit.

This email contains confidential an/or legally protected information. If you are not the intended recipient or have received this email in error, please notify the sender immediately and destroy this email. Unauthorized copying and unauthorized disclosure of this mail is not allowed. Any form of information or forward this e-mail through third parties is prohibited. IMS does not guarantee that this e-mail or its attachement is virus free.
IMS-International Mountain Summit® - Alto Adige – Vicolo dei Tintori 5/A – I-39042 Bressanone (BZ) – Tel. 0039 346 6903130 – Email: info@ims.bz